Ode to the IPA: the beer style that’s loved by craft beer drinkers across the world. It seems as though every brewery, no matter how big or small, has a flagship IPA in their lineup. But what exactly makes a beer an IPA? Where did it start, what does the style look like today, and where can you buy the best IPAs online? Keep reading to find out. 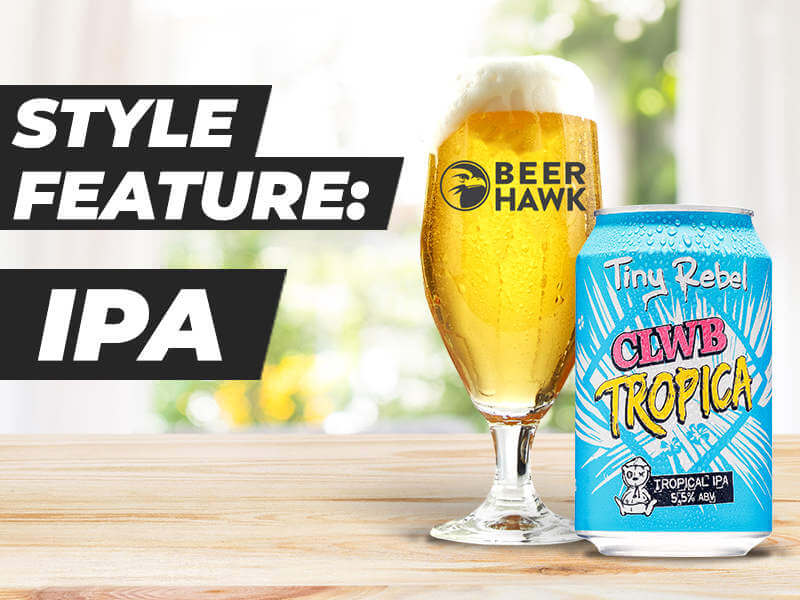 What is an IPA?

An IPA is a hoppy beer within the broader Pale Ale category, and the style usually has a higher ABV than other pale ales. However, not all IPAs are equal, and that’s what can make this category confusing, even for some self-proclaimed beer connoisseurs.

What does the IPA abbreviation stand for, and where does it come from?

IPA stands for “India Pale Ale.” Despite what the name might suggest, IPAs originated in England and legend serves that the beer was made with enough hops to preserve the beer as it made the long trek from England all the way to India. You’ll find a few different debates on the origin of the IPA, but this is the story generally accepted by the public. The style has since been experimented with and has branched out into many different sub-styles of IPAs. In fact, the style has evolved so much over the years, that the BJCP (Beer Judge Certification Program) doesn’t even classify English IPAs in the overarching IPA category. We’ll include it for the purposes of this article, though.

What’s the difference between a pale ale and an IPA?

An IPA is always classified as a Pale Ale, but a Pale Ale isn’t always classified as an IPA. A pale ale is an ale that is brewed with mostly pale malts. It typically has a medium body and its flavour profile is balanced. Within the Pale Ale family, there are many different types of Pale Ales including: English Pale Ales, Blonde Ales, American Ales, and India Pale Ales (IPAs). An IPA, a style within the pale ale family, can be broken out into even more sub-styles listed in the next section.

How much alcohol is in IPAs?

IPAs are known for having a higher ABV than most other beer styles. The average ABV or IPA alcohol content is 6%. Although, some sub-styles may be lower (like Session IPAs) and some may be higher (such as Imperial IPAs).

Double hopped.Triple hopped. Dry hopped. Hazy. Juicy. Fruity. These are just a few of the words often used to describe IPAs, but what actually makes one IPA different from the next? Here’s a handful of sub-styles you might come across in your local brew pub or brewery.

From the BJCP, the overall impression of an American ale is: “A decidedly hoppy and bitter, moderately strong American pale ale, showcasing modern American or New World hop varieties. The balance is hop-forward, with a clean fermentation profile, dryish finish, and clean, supporting malt allowing a creative range of hop character to shine through.” This IPA style is typically made with American ingredients and can range from medium gold to light amber in color.

The English IPA is quite different from the American IPA. This craft beer is still noticeably hoppy, but the English hops and English yeast transform the beer, giving it floral and earthy hop notes with a distinguishable fruity character from the yeast. The flavour profile in an English IPA is typically more balanced and rounded than that of its American counterpart.

While not technically an IPA style, West Coast IPAs are known for being incredibly bitter with an even higher ABV than standard IPAs. The malt flavour in this style is almost unnoticeable, and the hops are the main focus of this dry finishing craft beer.

One of the newest Specialty styles added to the BJCP is the NEIPA, sometimes referred to as an East Coast IPA or a hazy IPA. This style began in 2015 as a fad brew, but appears to be here to stay. The NEIPA is more complex than the West Coast IPA, as the hops are not the main focus. The New England IPA pours cloudy or hazy and focuses on bringing the juicy, citrusy flavours forward while leaving out some of the bitterness of a traditional IPA. While some beer snobs may argue that this shouldn’t be in the IPA family, there’s no arguing that this beer is a fantastic gateway IPA for those who’d like to develop a taste for hoppier craft brews.

Many of the IPAs you’ll find advertised and available at your local pubs are in a group called “specialty” IPAs. In addition to the NEIPA listed above, some other specialty styles include the Session IPA, Standard IPA, and Double IPA. Each of these styles is referring to the strength or ABV of the IPA.

Other examples of specialty IPAs include: Belgian IPAs, Black IPAs, Rye IPAs, Brown IPAs, Red IPAs, White IPAs, and Purple IPAs. Okay, the last one was made up. As you can see, IPAs stretch way beyond one single definition but there’s no doubt that IPAs put the “craft” in craft beer, and the style is enjoyed and preferred by beer drinkers around the world.

Beer Hawk has a wide selection of IPA beer to choose from, including mixed cases, multi-packs, and PerfectDraft IPA Kegs. Here’s some of our favourites.

The renowned IPA Mixed case includes 15 IPA Beers from a variety of breweries including the likes of Magic Rock, Tiny Rebel, Goose Island, Thornbridge and more. A recent review raves, “Thanks for an interesting and varied case of IPAs and Pale Ales. I'll be buying more!” --Roger, 04/05/2020. So whether you’re new to IPAs or just want to try a refreshing mix of beers you’ve yet to experience, this IPA case is a winner.

One of the most popular IPAs in the Beer Hawk lineup is the award-winning Punk IPA by BrewDog. This medium-bodied beer is brewed with six different hops and is dripping with fruity flavours. It’s even available in an alcohol-free version -- for all the flavour without the buzz checkout Punk AF IPA.

Crack open this IPA and let it take you to a warm, tropical beach with the sun shining down on you. Bursting with fruity notes of mango, pineapple, and passionfruit, this juicy IPA is a fan-favourite. It pours a golden/hazy colour and nearly takes on the appearance of an NEIPA. On 13/10/2020, a happy customer wrote the following review: “Nervous about putting this here, as it sells out quickly, but a tropical IPA at its best.”

If you have a PerfectDraft Keg Machine, you’ve got to try the Goose Island IPA on tap from the comfort of your home. This beer is so incredibly crisp and clear it almost looks like a lager, but you’ll be able to taste the elegant English-style IPA characteristics upon the first sip. The flagship IPA from Goose Island has won multiple awards and features hoppy flavours with balanced citrus notes. Check out all the Perfect Draft IPA Kegs here.

IPAs are Here to Stay

No matter how the style continues to evolve as time moves forward, one thing is clear: IPAs are here to stay. With so many different flavour profiles and sub-styles to try, there’s something for everyone in this craft beer category. So what are you waiting for? Check out Beer Hawk’s full list of IPA beers today.