Northern Monk Brewing Co amazing rise continues in a new brewery. We catch up with Head Brewer Brian Dickson who charts its rise and learn about his favourite beers 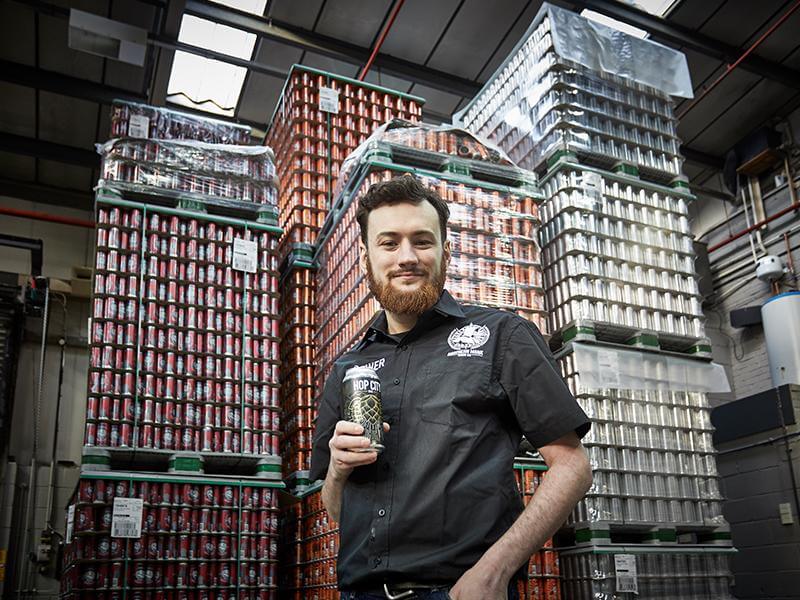 Time is relative. And as we thrust our way through the 21st century, with driverless cars and private rockets becoming a reality, we see another industry gently tapping the indicator and overtaking most other things: craft beer. The statistics are well worn (and well abused), but we do know that in the last five years the beer, and with it the drinks industry, have changed at a speed like never before. Yet even among the twisting vortex of beer, the rise and rise of Northern Monk has been astonishing. Five years ago, Russel Bisset and Brian Dickson, were shuffling fermenting vessels into a basement; Russ’ parent’s basement. In February 2017, I’m being shown around a large brewery in an industrial estate in Leeds. Mirror-clean stainless steel vessels rise up into the rafters, alongside house-high pallets of cans. “We tripled last year and we’ll triple again this year,” account manager Billy Marshall tells me.

It’s not only in terms of quantity Northern Monk has grown. The beer was always good, but in the last year especially it has begun to stop people in their tracks. Fortunately, many of those who love their beer, also made their vote heard on RateBeer. As I walk into their smaller, experimental brewery in the Old Flax Store – under its wonderful taproom – Lead Brewer Adam Lyle is literally opening a box filled with medals.

It has been sent from an address in the US and inside shining discs are engraved awards including one for being among the 100 breweries worldwide. It’s a heady rise. We spoke to Head Brewer and this month’s case curator Brian Dickson to find out more.

How did you start out with Northern Monk?
When I first came on board with Russell, the office was his mum’s dining room, and our warehouse was a cellar. So everything we brewed got delivered by down a cul-de-sac in Bradford and hand pulled into the cellar and then delivered in the back of his mum’s Renault.

Did you have any idea, three years later, you’d be across two sites and exporting to 20 countries?
Absolutely not. I mean the goal was alway to make the best beer we can, get some recognition. We had an idea, but we got there many years ahead of what we thought we would. It’s been absolutely crazy.

Did you have an ethos when you started?
We both enjoyed drinking the big, hoppy American IPAs that found their way over, and one inspiration was the scene was growing, but it was still hard to get good, fresh, UK IPAs. With a name like Northern Monk, we always looked backwards first, at the tradition of brewing in northern England, and Monastic influence and community element as well. We built our core range on looking back and then with a modern twist on it.

Creatively where do you see Northern Monk going in the next year or so?
Beerwise, our focus over the last year or two is to make the best IPAs we can do. Stouts as well - get those two flagship beers we do as good as we can. We’re delighted with Heathen IPA at the moment. We’re happy with the consistency of the core products. The Patron’s Project which is a creative collaboration with artists has allowed us to push things to another level. So now the biggest benefit of the bigger tanks is that our smaller tanks in the Old Flax Store are a little more freed up which has allowed us to start brewing lagers and really ageing things. We’ve stout ageing on coffee beans, we did a bretted blueberry ale, so we can justify holding things in tank a lot longer.

Over the next couple of years we want to start doing some mixed fermentations and really branch out in styles while keeping on the pulse on IPAs and making sure we’re leading the way on that. I’m personally delighted we’ve got a pilsner in the taproom.

BRIAN DICKSON ON HIS BEERS

“This is the second part of a two part collaboration with Opeth, a Swedish based prog metal band who are absolutely huge worldwide. The lead hop on this is Ekuanot, often described as ‘super Citra’, lots of tropical fruit, and a bit more floral with a lime zest character.”

“This has been with us from the very beginning. It has evolved in many ways and yet in some ways it’s just the same: it’s a classic West Coast IPA. Golden in colour, a caramel sweetness and a biscuity malt bill to it. A decent amount of bitterness and a pine and citrus hops – Simcoe is the lead variety in it. Really piney.”