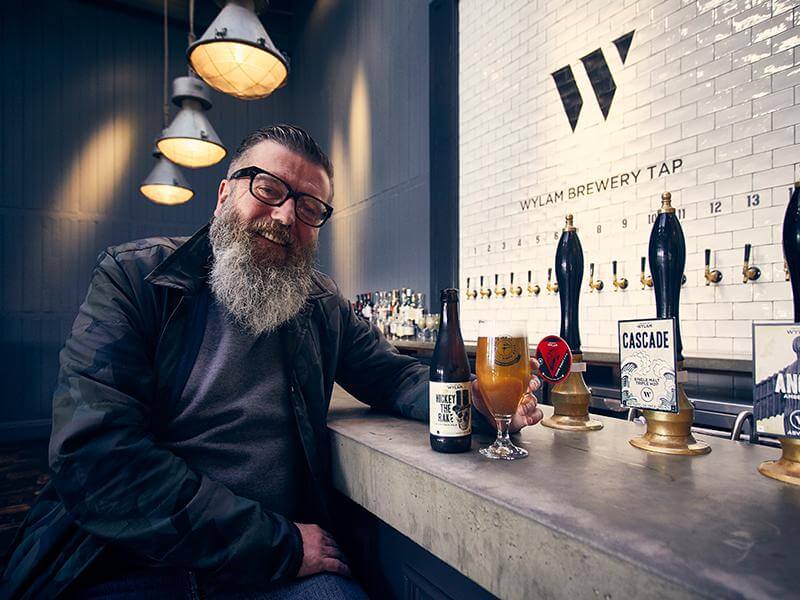 The Palace of Arts in Exhibition Park, Newcastle, is a Grade II listed building. It was first used to house artwork from across the world for the 1929 North East Coast Exhibition. It’s a stunning building, full of light and with a restrained grandeur. Three years ago, the future of this building was very much in question. The park was tired and the building expensive to keep up. It was, however, perfect for a brewery, a tap room, and a gig venue. Enter Wylam Brewery.

I meet Dave Stone, the director of Wylam Brewery, for a beer and tour of the Palace of Arts. He cracks open a Macchiato (we suggest you do the same – it’s in the case) and started on the brewery’s amazing story.

“The guys at Wylam Brewery had been making incredible liquid since 2000. It was very traditional, very local but very good quality cask beers,” Dave told me. At the time he was running a few pubs in Newcastle, after a long career in music and clubs. The group of pubs soon became Wylam Brewery’s biggest customer.

“We got a vibe for what was happening in beer, and we met the guys and got on really well with them, and we said we’d buy into the company, partner up and see where it goes. Ben Wilkinson, the Head Brewer, is incredible but he was constrained at the time because of the demands of the local market. But as soon as we started pushing a bit and getting our beers out a bit further it was almost like releasing the beast!

“He’d always made interesting beers, but the market was so small. But obviously what’s happened in the last five years is seismic. People’s minds and palates have opened up to much more that. Ben is able toexperiment a lot more and brew all these great beers we’re making now.”

And those beers are now sought after around the world. France, Spain, Sweden, Denmark, Singapore, China and Germany are all importing Wylam Brewery’s beers.

“It’s a real buzz to get your beer out across the world,” Dave said. “Five years ago you couldn’t get a Wylam beer outside the north-east. A lot of people think we’re a new brewery, but we’ve been going 18 years. It’s been a really interesting journey.”

We take a tour. The taproom, full of wood, exposed brick and industrial fittings, is a beautiful space. Full of light, full of life. That there are 14 keg taps, eight cask hand pulls and a fridge full of their friend’s beers, only adds to the experience.

“We stock wines and spirits and a bit of cider for the non ‘beer-lievers’. People come here and say they don’t like beer and ask for a wine or spirit. But we encourage them to taste something, and they go ‘wow’. Getting more people turned on to beer is probably the biggest challenge for the independent beer movement at the moment. We need to keep our audience growing.”

We move into the Grand Hall, again, full of light, but it is the stage that is the real draw. Already booked this year is Hayseed Dixie, Huey Morgan, and The Lake Poets. Around the walls are wooden barrels full of beer and two more well-stocked bars. Out the back is the sparkling brewery. A tidier brewery I’m not sure I’ve seen. I try a juice bomb out of the tank – it’s rich and thick, full of those big fruity hops. Yet, something sets it apart. Ben reels off some hops that I’ve not heard of before, alongside the big hitters. Experimentation is essential at Wylam, but never at the expense of drinkability.

Through the kitchen where the chef is expertly carving up some venison, and we’re back in the tap room for another beer. We chat about the (many) upcoming collaborations, Dave’s time in the music industry and just enjoy the beer, the sun through the windows, and good conversation. It’s that kind of place.