Most beer that's been brewed can be classified as one of two beer types: either a lager or an ale. But how can you tell the difference? What makes a lager a lager, and an ale an ale? Keep reading to learn more about how they're made, and what types of flavours, aromas, and appearances you can expect from either beer type. By the time you're done, you'll know how to talk about beer like a pro! 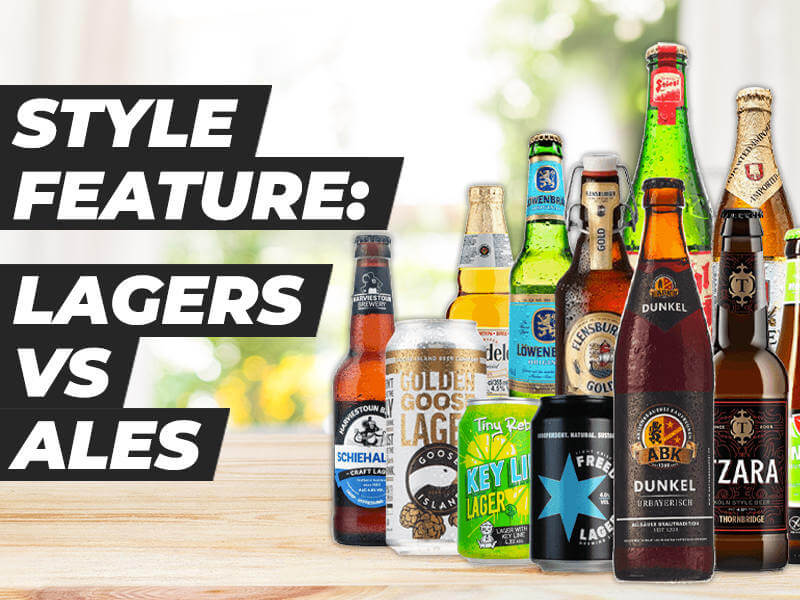 What is a lager?

Lagers are typically made with bottom-fermenting yeast, meaning the yeast literally ferments at the bottom of the beer fermentation vessel. Because of the nature of this yeast, it also prefers to ferment at cooler temperatures (9-15°C, 49-56°F). Lagers typically lack any fruity characteristics, and "may be crisp and hoppy like a pilsner or sweet and malty like a dopplebock" (Ch. 19, John Palmer's How To Brew). The word itself, "lager," is of German orientation stemming from the word "lagern" which literally means "to store." Lagers usually undergo a cold fermentation, and then the beer is transferred to a different vessel where it is matured in cold storage for a longer period of time. Most homebrewers stay away from making lagers until they've mastered the art of ales, as lagers require temperature control equipment and precise brewing skills to make correctly. The type of yeast and temperatures used to make lagers usually results in a crisp, refreshing beer to be enjoyed on any day of the year. Some lager styles include: German-Style Pilsener, American-Style Pilsener, Munich-Style Helles, Vienna-Style Lager, German-Style Maerzen, German-Style Oktoberfest/Wiesn, Maibock, Dopplebock

The World Lager Mixed Case is the best way to try a variety of lagers in a single case of beer. Contains 15 lagers from 15 different breweries around the world.

The Golden Goose Lager from Goose Island Brewing is the brewery's house lager. It's carefully made with the highest quality ingredients resulting in a clean yet complex lager with notes of bread and malt combined with a spicy hop finish.

Camden Hells is one of the most popular craft lagers in the U.K. The classic German lager combines the characteristics of a Helles and Pilsner to deliver a clean, crisp, fresh lager that you'll want to keep stocked in your fridge.

Craving a classic lager? Grab yourself a case of Budweiser and crack some brews open with friends.

What is an ale?

Unlike their lager counterpart which uses bottom-fermenting yeast, ales use top-fermenting yeast. Yeast used to make ales is usually similar to the yeast used for baking bread, which isn't surprising considering the often malty, bready characteristics of ale beers. Ales also ferment at warmer temperatures (68 to 72 °F, or 20 to 22 °C). Since yeast ferments faster in a warmer environment, most ales don't take as long to complete the brewing process as lagers do. Ales tend to leave more room for experimentation than lagers do, and as a result there are far more styles of ales than lagers. Some of these include: IPAs, Pale Ales, Extra Special Bitter, Brown Ales, Blonde Ales, Red Ales, Brown Porters, and more.

Try 12 different ale beers in the British Ale Mixed Case. From pale ales, to stouts, to bitters and more, this mixed ale beer case has a little bit of everything.

Sparkling clear and copper in colour, the Goose Island IPA almost looks like a lager but its pleasant hop flavours are clearly reminiscent of an elegant English-style IPA.

This smooth-drinking, amber-coloured, top-fermentation beer features mild caramel flavours with a balanced honey-like mellowness. The Belgian Ale from PALM Brewing is designed to be enjoyed with kindred spirits.

This decadent, salted caramel chocolate milk stout is a mouth-watering alcoholic dessert in a can. The Millionaire Stout pours a deep velvety black colour and is great for special occasions like birthdays or Valentine's Day.

The Leffe Blonde Ale is brewed with Belgian yeast resulting in a banana, clove, and pepper aroma that mixes with the malt to smell a bit like freshly baked spice bread. This is an easy-drinking Belgian Blonde with a short, sweet finish.

While most beers can fall into the ale or lager category, some beers are brewed using unique methods or experimental ingredients that have placed them into a catch-all category called Hybrids and Specialty Beers. These could be beers that are brewed with a lager yeast but fermented at ale temperatures, or beers made with adjuncts (extra ingredients), such as cacao or fruit, or many sour beers which are made with an entirely different type of yeast. Beer drinkers and brewers don't always agree on what's considered a hybrid beer versus a lager or ale, but that's part of the fun of learning about beer!

In conclusion, most beer made today is classified as either an ale or as a lager (and sometimes a hybrid). From that initial classification, beer is then broken down further into styles (Pale Ale, Oktoberfest, Dopplbock, Amber Ale). Knowing how to define beer and what characteristics to look for when choosing a beer to drink can be a really helpful tool in expanding your own personal beer range. If nothing else, it's fun trivia to share with friends over a few beers. Cheers!