Porter vs. Stout: What's the Difference?

Ah, the age-old battle between porters and stouts. Both are dark, craft beer styles...but how are the two different from each other? If you were looking at the two side by side, you probably wouldn't be able to tell the stout from the porter, but if you give them a careful whiff and a swig, there's certain differences you *might* be able to taste and smell (or should be able to taste/smell depending on which beer nerd you talk to). But the biggest differences between the two styles are historical. 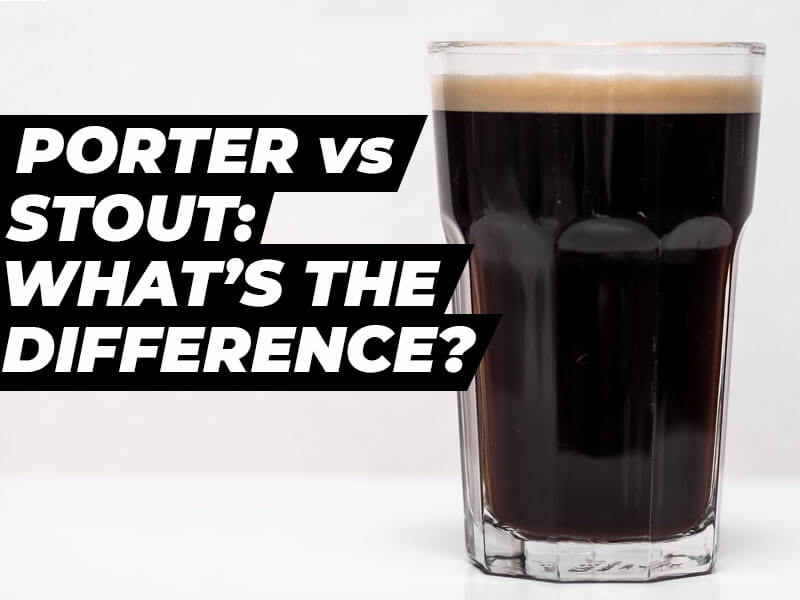 What's the Difference Between a Porter and a Stout?

The most common answer you'll find for the difference between porters and stouts is this: stouts often contain roasted flavours and notes of coffee while porters do not. Historically speaking, porters usually have a lower ABV than stouts do, but this is not always true today. Porters are typically made from malted barley and stouts are made from roasted, unmalted barley...but again, not always the case. According to the BJCP, a porter is described as: "A substantial, malty dark beer with a complex and flavorful dark malt character" whereas a stout is described as being, "fairly strong, highly roasted, bitter, hoppy (and) dark."

To be totally honest though, if you ask two different brewers or beer enthusiasts what the difference is between porters and stouts, you'll probably get two different answers. At the end of the day "porter" and "stout" are often used interchangeably because there are so many similarities between the two.

What Came First, Porters or Stouts?

The one thing almost everyone can agree on is that porters came first...way easier to answer than the classic chicken vs. egg debate.

As far as geography is concerned, the classic porter craft beer style was created in London in the 1700s. The style continued to develop for quite some time and eventually some brewers began making porters stronger, or more stout. Hence, where "stout" comes from as it was essentially a derivative of the original porter and was originally called a "Stout Porter." Confused yet? Keep reading, it gets worse.

Both the 2021 Brewers Association Style Guide (AOB) and the 2015 Beer Judge Certification Program Style Guide (BJCP) recognize a few different designations, or sub-styles, of the Porter beer style as it is brewed today. While there is some variance between the two style guides, the common denominator is that most of these porter designations tend to be more full-bodied than their stout counterparts.

Porters Recognized by Both Style Guides:

While stouts were originally brewed as a derivative of porters, they are arguably now more popular than porters. Brewers everywhere still struggle to identify the differences between these dark craft beers, but you'll typically see breweries feature more stouts on their tap lists than porters. Stouts tend to leave a wee bit more room for experimentation during the brewing process. Below are the stout designations officially recognised by the two primary style guides.

Stouts Recognized by Both Style Guides:

Now that we've beat the topic of "porter vs stout" to death...let's answer one more question. What's the difference between a brown ale and a porter? Brown ales and Porters might look similarly when poured into a beer glass, and they even have some of the same flavour and aroma characteristics. However, brown ales (whether English or American...both style guides recognize both designations separately) typically don't have any of the roasted flavours you might find when drinking a porter or stout. The English Brown Ale spawned from the English Mild Ale, and can range in colour from a reddish/copper brown to a dark brown. The American Brown Ale came after the English Brown Ale and uses American ingredients.

Porters & Stouts Mixed Case: A Bit of Everything

Congratulations! You've officially learned all about the differences between porters and stouts. Now it's time to get your hands on this cracking Porters & Stouts Mixed Case filled with 12 beers from 12 different breweries. The mixed case includes four porters and eight stouts, each of them dreamy and delicious. With nearly 200 five-star reviews, you can't go wrong with this case of beer.

"A wonderful and delightfully tasty blend of porters and stouts. So unlike Guinness. You will be amazed at the variety and will discover a few favourites that would have remained unknown." --Colin, November 2020 (5 Stars) 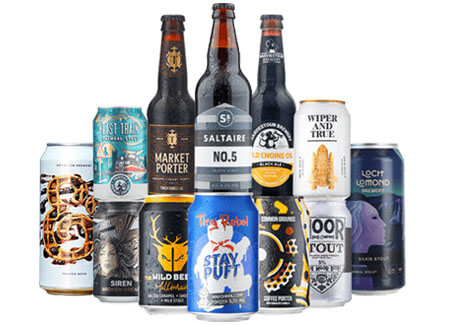 As you can see, there's not necessarily a clear difference between porters and stouts and this is a battle that will likely continue as long as beer keeps being made, or until pigs fly. In the meantime, it's probably okay to use "porter" and "stout" interchangeably because honestly, no one really knows the difference anyway. Regardless of whatever dark, delectable, malty, roasty beer you're drinking, you can be sure you won't regret a single sip.