Siren Craft Brew is one of the country's most innovative breweries. We chat to founder Darron Anley and Head Brewer Kyle Larsen to find out why 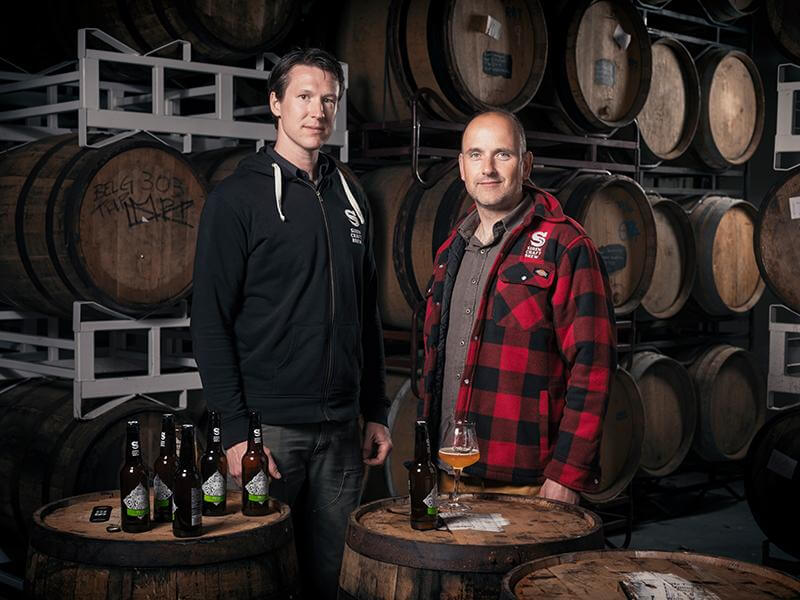 It was the number of barrels in the warehouse that seemed surprising. Hundreds of them. And then I remembered where I was: at Siren Craft Brew, one of the most endlessly interesting and experimental breweries in the country. A new taproom and barrel room are up and running, the new brewery is bedding down nicely. Things are running well for the brewery. Very well.

Long-time Head Brewer Ryan Witter-Merithew has moved on and American Kyle Larsen is now a year into the role at the helm. Yet, as I walked away, bottles of brand new Siren beer chinking in my bag, I get the impression that nothing stays still. Ever.

Over the day with Siren, I had the opportunity to chat with founder Darron Anley and Kyle Larsen, to try and discover what makes Siren, well, Siren.

Kyle, the head brewer, I tell Darron, said he has unprecedented freedom. How important is that? “Hugely so, says Darron. “When I started up and before I made the final plunge, I went to San Diego to the Craft Brewers Conference in 2012 and met loads of cool people. It was like walking into an Evangelical church, and I learnt a lot. I got a great bit of advice from Kelly Ryan who used to be at Thornbridge. I talked about the inspiration. One of the things he said was just getting a professional brewer and someone who has experience of playing around and give them complete creative freedom. And I did that for Ryan [Witter-Merithew] straight from day one.

Never did he look at thecost of anything and it will be the same for Kyle. For example, we’ve a Turkish coffee imperial stout coming out and there’s £2,500 worth of figs in it! I’d rather take the view we make the beer we want to make than pull back and appease the accountant.”

Along with the number of different beers Siren makes, was this freedom exciting or daunting for Kyle? “Both!” Kyle says. “It was something I was looking for. I wanted more creative freedom and I wanted to push my limits. Anyone who wants to get better at what they do they want to push their limits. I had a lot of creative freedom at Double Mountain [in Oregon] as Head Brewer, but it’s nothing to what I have here. I can do anything here, which it turns out is very daunting!”

Darron started Siren in 2011 after selling his IT company and becoming very interested in what BrewDog and Thornbridge were starting to achieve, as well as, of course, what was going on in the States.

“When I started, one of the things that was really important was to have a solid core range that piqued people’s interest at varying different levels at where they are on the journey through beer.”

And it’s quite some core range: , an oatmeal pale ale, Soundwave, a West Coast IPA alongside Broken Dream – of which Darron says “even now as a core beer it is different: a 6.5% stout with coffee, oats and lactose”.

“We then want to layer on that stuff that really excites us and pushes us,” Darron adds. In particular there’s a lot of talk about a Coffee Series of four different beers including an imperial stout with more figs than my car costs, to a sour coffee beer. Talking to Kyle, it’s the 240 plus barrels that he has his eye on. “Here’s one of my favourite things about Siren: we made a full batch of beer, 5,500 litres of beer, all to experiment with. They’re letting me put them in barrels with no end in sight just to see how we make the mixed culture programme work for Siren.”