How Beer Is Made

Sweet, sweet beer. The magical drink that makes the world go 'round. If you're like many beer drinkers, you just head to your bottle shop or buy beer online and don't think twice about how the beautiful golden liquid came to be. But if your curiosity is begging you to learn more, here's the secret process to creating beer at home from just a few perfect ingredients: water, grains, yeast, and hops. 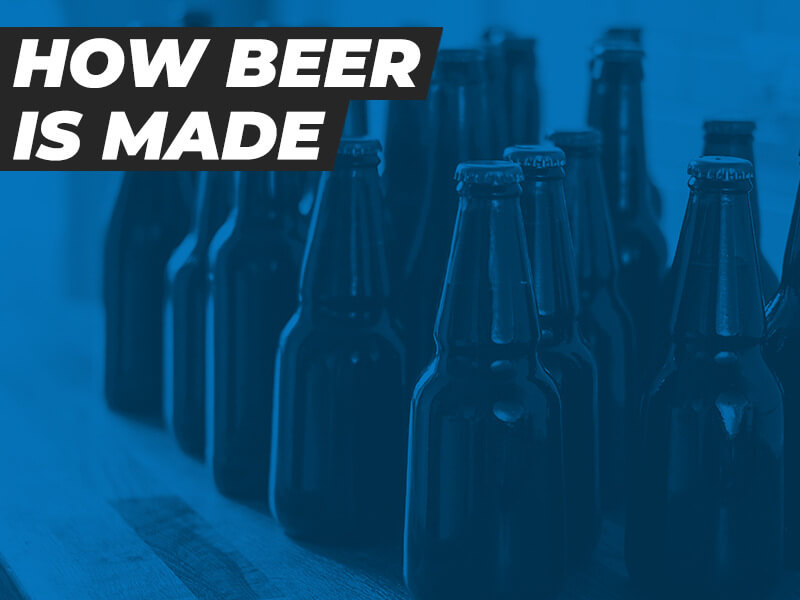 The first step to making beer is essentially producing sugar water, AKA "wort." This happens when you steep beer grains in hot water for about an hour or so to extract the sugar from the grains. This process is called Mashing. Once you've extracted enough sugar from the grains, then you need to separate the grains from the wort, a multi-step process known as lautering. From here on out, you won't need the grains; you'll be using only the clear wort.

Step 2: Boil and Cool the Wort

Next, you'll bring the wort to a boil for about an hour or however long the recipe says. During this step you'll get to add hops to the wort. Hops are a cone shaped plant that grow on a vine. When added to your wort, they contribute bitterness that helps balance out the sugar as well as acts as a natural preservative. This is why IPA beers were allegedly first brewed -- they were made with enough hops to preserve the beer on a long voyage from England to India.

Now that your wort has finished boiling and you've added the hops, the hot liquid wort needs to be chilled as quickly as possible. You can do this by sticking the kettle in a sink full of ice water, or you can use a special piece of equipment called a wort chiller which is hooked up to a faucet or hose and placed into the kettle to quickly cool it down. This process needs to be done quickly to help avoid any unwanted bacteria or off flavours from developing in your beer.

Once the wort has reached the optimal temperature according to your recipe, you'll transfer it from a kettle to a sanitised carboy, bucket, or other fermentation vessel. You can then "pitch" (or add) the yeast to the wort. Then you'll put a lid on the vessel and let the yeast eat the sugar inside the wort to ferment and produce delicious beer.

How long does it take to ferment beer?

Short answer: it depends. The time it takes for beer to finish fermenting depends on the type of beer you're making. Ales typically ferment at room temperature for a couple of weeks, and lagers prefer to ferment in a cold environment for a couple of months or so. Learn the differences between ales and lagers.

Once the beer has finished fermenting, all you need to do is bottle it (or keg it) and give it some time to carbonate. After that, there's nothing left to do but sit back, crack open a cold one, and enjoy the fruits of your homebrewing labour.

At Beer Hawk, we think beer tastes even better when we know the level of effort and amount of love that goes into the brewing process. Whether you're a regular at your local homebrew shop or just want to learn more about beer, knowing how it's made can help everyone experience craft beer with a new level of gratitude and appreciation. Cheers!