Relax and Have a Beer

For eons, beer, like food, has been at the centre of the table connecting people. Friendships solidified over a common pint. Is this not enough? Our beer sommelier, Maggie Cubbler, shares her concerns about how beer is starting to take itself way too seriously. 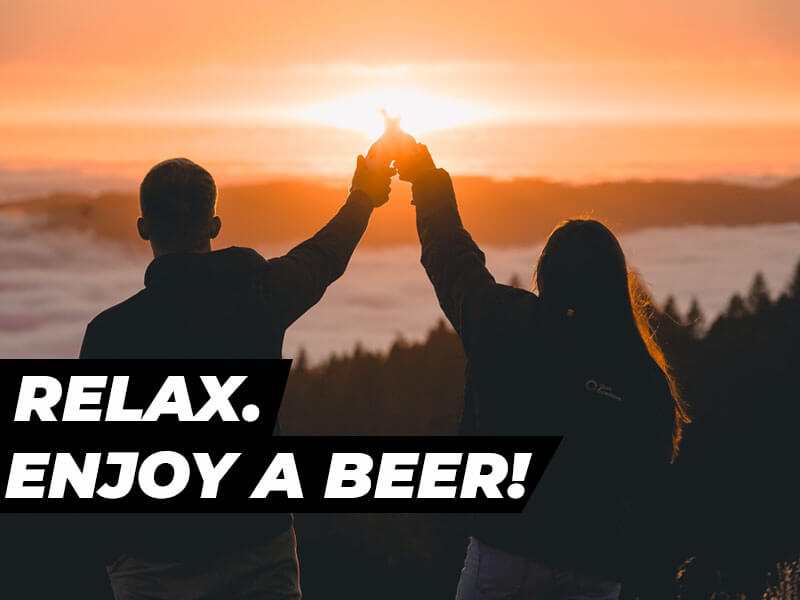 Beer Drinking Memories from Years Ago

The band slipped seamlessly from one song to the next. As soon as the opening chords of the new song became recognisable as “Sweet Caroline”, I let out a full-throated holler and, while jumping up on the beer-soaked bench in a leap that belied my 37 years, looked for someone who shared my excitement. Fortunately I was surrounded by an entire tent-full of people who, for one song in time, were all Neil Diamond fans. Stomping on the bench—“baaa baaaa buuuuuuhhhh”—I spilled a bit of this year’s Oktoberfestbier down the front of my dirndl’s green apron. Unaffected, I took a big sip. “So good! So good! So good!” The crowd was sloppy, the lights were bright, and not a single one of us checked the Ratebeer score of the beer.

The ratings from Internet strangers didn’t matter. What other people experienced didn’t matter. The fact that I wasn’t drinking the world’s best beer didn’t matter. I was there and I was living it through my own eyes. Making my own, unique, memories. And watching my boss’ dance moves get ever-more, shall we say, interpretive.

Trip Advisor. Yelp. Ratebeer. Each gives us our own corner of the Internet in which we can tap-tap-tap our opinions away to our heart’s content. Convinced that we owe it to the world to save others from the miserable fate of not having the exact same experience as our own, we dutifully log in to relay our latest tasting notes or warning about the lukewarm soup. And while there’s a use for this mass sharing of opinions, I can’t help but wonder what we’re all missing while making mental notes of even the most average of experiences.

Criticism of user-generated content sites such as these isn’t new. They do, indeed, have the potential of driving everybody to the exact same place, to enjoy the exact same holiday. Furthermore, while everyone enjoys “the best French onion soup in Paris” at Au Pied de Cochon, are we not sitting there subconsciously—or consciously even—comparing it to what we’ve read from others? I wonder which one was the rude waiter to the lady from New Zealand? Yes, BigTex1980 was right; the cheese is hard to chew. I’m not sure I want the humour of the moment where I have to cut soup with a knife and fork influenced by something I read by a faceless Internet person.

Please don’t get me wrong. This is not a commentary on how heeding advice from amateur web warriors may be affecting our holidays; there is usefulness in gathering some information when planning a trip or a night out after all. This is instead a critique directed at those who set out sway perception. I’m also looking at you, so-called influencers.

More and more as the market changes and matures, I’m finding that there’s this strange sense of celebrity and self-righteous opinion seeping into beer culture. It’s starting to take itself way too seriously.

For eons, beer, like food, has been at the centre of the table connecting people. Families celebrated or mourned around heaping piles of potatoes or beef or lasagne. Friendships solidified over a common pint. Is this not enough? Is just living or creating memories or experiencing life—in even the most average of ways—not actually experiencing life to the fullest? Whoa. This is all getting a bit existential here.

Beer Drinking in 2021 and Beyond

Capitalising on the fact that FOMO is real, Internet personalities and influencers have attempted to create a culture where we should all expect and demand to be entertained with every sip or we’re missing out. In recent years, some breweries, in their desire to be heard above all the noise, pandered to these voices and keep coming up with bigger and better beers, bigger and better “brand experiences”. In turn, we--the beer-drinkers of the world-- demanded something new, something different and something that’ll bring the house down.

The result was often too many products. Too many trends. Too many memories and perceptions and experiences tainted by the opinions of others. While I recognise that the experience of Oktoberfest is hard to beat, I’m not choosing to remember it for its awesomeness. Instead, I want to remember Mark’s interpretive dance. Pretending to know all the words to “Sweet Caroline”. The chicken. I’m remembering the connections I made over a litre of beer, which will never be affected by the overall score of 66 on Ratebeer.

As the world slowly starts to get back to normal after an unprecedented year, this is a quick note of caution to be careful of the normal we all want to return to. Yes, beer ratings and opinions have their place, and it's important to challenge creativity in the brewing community. But as we start to crack open brews again with friends, families, and co-workers, don't forget to relax and just enjoy your beer.

Yes, there is irony in my opinion about giving an opinion. But before we end up with beer critics in a local newspaper column, making and breaking careers, we could borrow from the words of Charlie Papazian of homebrewing fame. Let’s relax. Not worry. And have a beer.