That time is upon us again--it's Oktoberfest! A festival that started in 1810--initially as a celebration for Crown Prince Ludwig's wedding but had morphed over the years to include horse-racing and an autumn festival--has ultimately found its identity as a place to drink liters upon liters of deliciously drinkable Oktoberfest beer while being enchanted by smells of grilled meat, pretzels, and roughly six million people all trying to use the same toilets. Although in-person festivals won’t be happening in 2020 due to the global pandemic crisis, we can still all toast ein prosit! with each other from a distance. 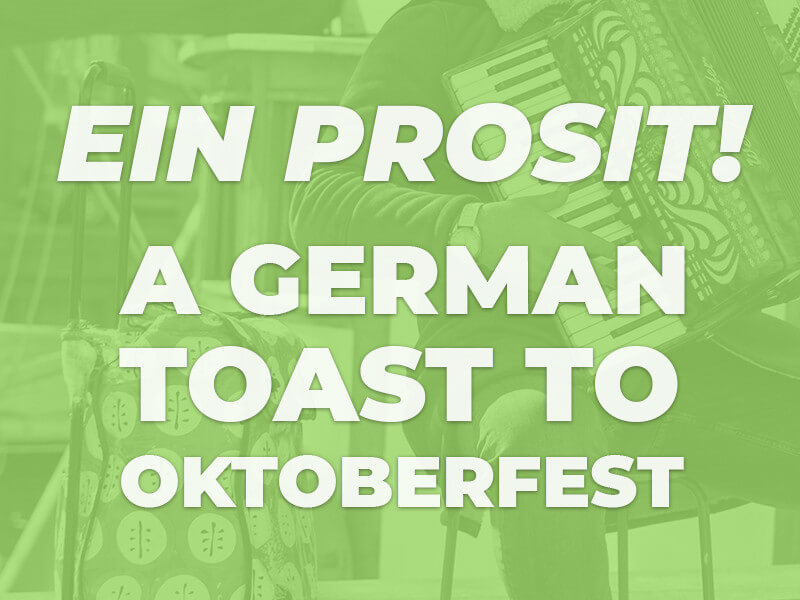 “Ein Prosit” is German toast often sung by crowds during Oktoberfest celebrations around the world. The song was written by Bernhard Dietrich in the 1800s and the joyful toasts lives on today. So, what does “ein prosit” mean? Here are the lyrics to the popular song to help you sing cheers in German:

Toss on an “Ein Toast!” at the end to encourage a celebratory “bottoms up!” before drinking your Märzen with friends. Fun fact: if you find yourself in Switzerland with a beer in hand, you can substitute “Broscht!” for “Prost!” This is the Swiss-German way to say “Cheers!”

Translation: To your health!

This toast is similar to “Prost!”, but it’s typically used in more formal situation situations like a fancy dinner or retirement party. Prost is typically used as a toast for drinking beers, and Zum Wohl is usually the go-to toast for wine, schnapps, or spirits.

This toast might sound familiar – it’s been adapted in English as a phrase to use when someone near you sneezes. But, it is more commonly used in Germany as an alternative to “Prost!” in nearly all occasions where adult beverages can be enjoyed.

Translation: "There is now a minibar where my liver once was."

Now that you’ve learned the basics of Ein Prosit and German beer drinking, you’re ready to celebrate Oktoberfest at home.