Our Beer Sommelier, Maggie Cubbler, explores the fantastic beer that is coming out of the Emerald Isle and pairing it with some of her favourite classic dishes. 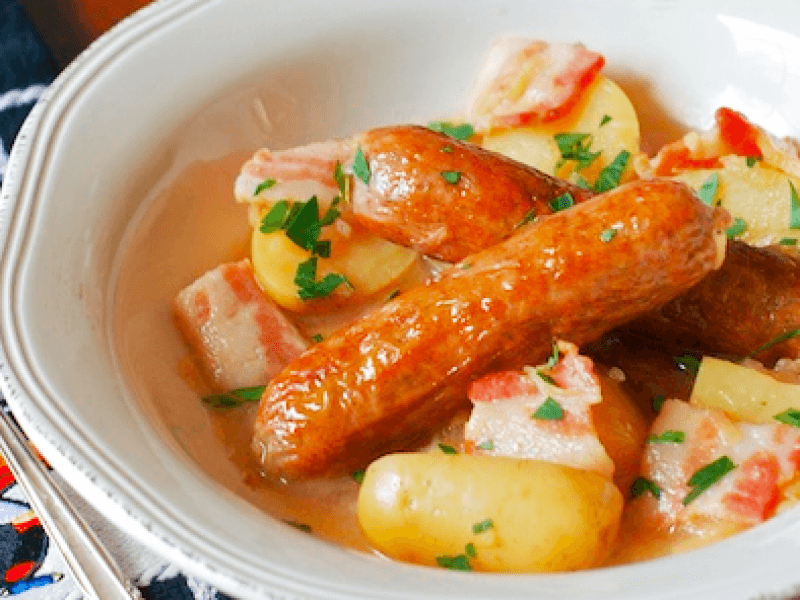 While my compatriots back in the States are celebrating so-called Irish beer this month by dyeing it green and claiming a cousin who got drunk on Temple Bar as proof of their Irishness, I get to celebrate the high-quality artisanal product that Irish craft beer actually is. So, if you're feeling lucky (sorry, one little pun) let's make this Saint Patrick's Day the start of your discovery of all that is great in modern Irish beer.

The best way I know how to get this party started is with food. On that account, I've picked a few of my favorites from our Irish Mixed Case to go alongside some the best traditional Irish foods. I've even included a cheeky recipe for a dish that includes BOTH bacon and sausages. I promise, none of it will make you pee green.

One of Ireland's most highly-respected breweries, Co. Sligo's The White Hag churns out bold, experimental and overall kick-ass beers like their Little Fawn Session IPA. This crisp, zingy beer has prominent notes of grapefruit and lemon that melds into its bitter finish. I like this beer with fish cakes because the zesty finish cuts through the cakes' pan-fried crust. I like to include a good bit of citrus zest in my fish cakes—primarily lemon although orange would be great too—which would really accentuate the beer's citrus-fruit character.

I discovered Co. Cork's Eight Degrees brewing on a trip to Galway a few years back. It took us a long time to get them in and I'm glad we've got their fantastic Sunburnt, a classic Irish Red Ale. I think would complement the traditional cheese, Coolea, with its sweet nutty and caramel flavours. It might not be the most Irish of dishes but life is better with cheese.

I'm a huge fan of anything with bacon, beer and sausage. If there's anything you should eat on Saint Patrick's Day (well, flipping any day, really) it's this Dublin Coddle. Named as such because the stew is simmered, or coddled, for hours. Traditionally it was made with a stout, similar to the White Hag's Black Sow. Its gentle roasted bitterness and notes of licorice are a nice complement to the briny, salty stew. Super easy to make, you could throw a lot of things in a Dublin Coddle, actually: amber ales, pale ales, ciders. Go for it!

2 yellow onions, sliced into half moons

250ml beer of your choice

salt and pepper to taste

Heat the olive oil in a large pot over medium heat. Brown the sausages on all sides then set aside.

Add the bacon and onions to the pot and cook until the onions start to brown, about 10 minutes.

Add the sausages back to the pot and then add the halved potatoes. Cover with the chicken stock and beer.

Add the thyme and bay leaf then season with salt and pepper (being careful not to overseason as that can intensify during cooking. You can adjust when serving).

Reduce the heat to low and cover.

Simmer for 1-1 ½ hours or until the potatoes are cooked through.

Serve with the chopped parsley and a fantastic Irish beer. Cheers!